Chapter from my novel in Immedia's anthology

A chapter from my novel has been published in Mauritius, in Immedia's anthology titled Facing Challenges. The book will be officially launched on December 7th at Domaine Les Pailles by the President of the Republic, Mr. Kailash Purryag, and the former President, Mr. Cassam Uteem.

Now, this is one incentive to finish editing the rest of the chapters. But can anyone whip an artist to produce faster? I'm one of those who crawl like a turtle ... yeah, slowly and surely, I've strung words into sentences, then paragraphs, then chapters. But the polishing part is another challenge. Imagine spending the day bouncing words inside your head, wishing them to turn into pearls, but they often rebel and spin into headaches. I'm thankful to wonderful friends who don't mind whacking me with a good dose of pressure when I'm not on track ...like repeating over and over, "when is that book going to be published?" Okay, it's happening soon, for real. Look, a chapter has been published already. One chapter a year? Let's see, mmmhh it may take over 69 years to get the whole novel out. That certainly puts things into perspective. All right, keep up the pressure. I'll aim for 2013.

Time to get back to the novel instead of rambling on here ... And there's a photo exhibition I'm working on also, not to mention the silk painting. And all the problems around the world that I wish I could solve ... and closer to home, I wish our politicians would move forward and close the Darlington nuclear station and switch to solar, wind and other alternative renewable energy, and I wish there were less greed and more love to spread around ... 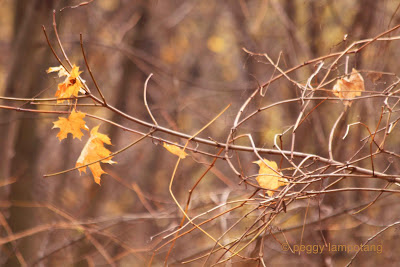 A few hardy leaves bask in the last glow of fall

Posted by Peggy Lampotang at 11:08 pm No comments: Links to this post