About accidents, chances in life

"That accident wasn't even fatal, because nothing is written anywhere, just life riddled with last minute chances, these little non-decisive situations which challenge speculation and forecasting, and laugh at us as we wait."

I'm quoting Pierre Péju here because of this continuous debate I have with my dear friend C regarding fate. Her belief in fate reminds me of Greek tragedies. That same helpless way that fate controls Oedipus' every action, no matter what he tries to do to stay away from the horrible predictions of the Oracle. Not that I'm 100% with Pierre Péju. I think part of our personality is written in our DNA, over which we have no control. This brings us to the never-ending nature versus nurture debate. Wouldn't it be easier to say it's 50/50 and end all debate there? Our genes and our environment determine equally who we are, and then the rest is within our control. The choices we make in life and the chances we are willing to take are not part of fate. But then, as my friend C would argue, these choices and chances are controlled by genetic predisposition. Vicious circle isn't it? That's why we haven't been able to find a common ground on this. That's when I throw in that genetics don't predict everything because we're surrounded by the last minute chances that Pierrre Péju is talking about, and these are not predetermined. Okay, that's enough debating for today. 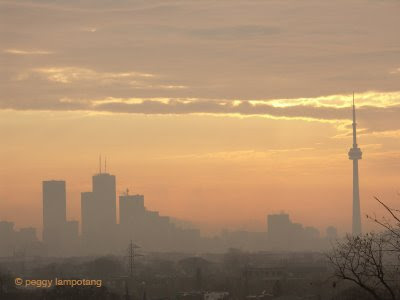 Early morning fog from my studio.

Illustration of debate: This view is one of the many chances offered to me. I chose to take this photo. Fate didn't determine this. Couldn't resist this, C. Please, don't get mad. We'll continue later. :)
Posted by Peggy Lampotang at 3:22 pm No comments: Links to this post

The Reservoir Lounge on a Saturday evening. Sophia Perlman and The Vipers perform for a packed house. I meet Sophia in front of the mirrors in the washroom. She's friendly, introduces herself and says she sings on Mondays usually, and she's putting on her sophisticated look for the Saturday crowd. Her voice is deep but there is a crispness to it, as if fine fibres of clear sounds are melding into a harmonious whole. On stage, her voice is even more impressive as she erupts into higher notes. She gives a rich lilt to Diamonds on the soles of her shoes.

My friends and I were greeted at the Reservoir door by a flirtatious Rod Stewart look-alike who asked for the cover charge first, then blew kisses. A waiter whose shoulders Suzanne found beautiful, served us tapas, pizza and wine. We danced on the few square feet available with a man nicknamed Mr. Transition by Yolande because of his hmm...interesting life story. Reservoir Lounge bubbles with warmth. Jazz, live music, has a way of doing that. But also, the place is so small that you bump into other people and have to talk to them whenever you take a few steps. I read that celebrities as disparate as Peter O'toole and Prince have been seen there. You can guess the varied range of music lovers. Girls, it was fun.
Posted by Peggy Lampotang at 2:50 pm No comments: Links to this post

In memory of my cousin who passed away a few days ago
I will always remember him as a fine dancer
he moved with such grace and natural rhythm
in the dance halls at family weddings
the only few times I usually met him
and danced with him last in May
I heard about his health and phoned
but his voice was low and weak
so he let the music speak
and held the phone
to the speakers
I listened silent
to the drumbeat
and wished he
could still
dance
but
it was
not
to
be
...
yet ...
maybe
he did dance
his way to heaven
Posted by Peggy Lampotang at 5:38 pm No comments: Links to this post

Went to the Orbit Room on Tuesday night with a friend visiting from abroad. It was her last night in town. We arrived at 10 pm, and wondered whether we should stay. The club looked empty except for half a dozen people. We didn't have the energy to look for another place. And we thought, so what, maybe it's like that everywhere in the city on Tuesday night - good old hard-working Toronto already in bed.

It was awkward to watch a band larger than the audience. You wonder how they feel and whether they're watching you as much as you're watching them. However, by the time the first set was half-way through, the room was packed and nightlife in Toronto was alive and well. One of the musicians, with dreadlocks and a kind, friendly smile came to say hello to us, adding to the warm atmosphere of the place. A guest singer named Serena, blonde with a sweet angelic face, belted out Leonard Cohen's Sisters of Mercy with a Reggae Jazz beat - if you know what I mean - and you could feel her soulful voice going right through your guts. I'm relieved to know that the creative heart of Toronto is beating every night in this club and many others I still have to discover.
Posted by Peggy Lampotang at 2:17 pm No comments: Links to this post

Back to blogging. Another year is gone. The phenomena of blogging, YouTube, and other forms of online mass communication is mind-boggling. It's all happening so fast I feel as if I'm part of an army of ants scrambling, typing away at the keyboard to keep up with the cornucopia of information and new experiences. One of which is discovering Peter Cincotti, a jazz singer/pianist that my friend Chris raved about. I'm now hooked on his romantic voice. Can't believe he's only 21 years old.

For photography Andrew's daily blog postings are truly inspiring. His composition and use of lighting, with focus on industrial sites, bring out the awesome beauty of what we would otherwise consider ordinary things. Am I biased because he's Teri's friend? I don't think so. See for yourself the results of his passion and dedication to photography.

Books I've read in the last months that are worth mentioning: Three Day Road by Joseph Boyden is the story of two Cree Indian friends, snipers for the Canadian army during World War I, Sweetness in the Belly by Camilla Gibb is about a white woman's Islamic faith. They both deal with cultural rifts, and a sense of isolation that I find very compelling.
Posted by Peggy Lampotang at 8:55 pm No comments: Links to this post