It's the time of year when spring brings too much eagerness and colds attack ruthlessly. I've been flattened with a bad one, and it's forced me to slow down and take a break from stressful situations.

Spent a weekend at a friend's country home. When time stretches lazily in the contemplation of rippling water, shimmering trees, colourful birds flitting around, it helps to replenish the soul and put things in perspective

Wrote a review for the show Rendezvous-when Sight meets Sound.

Happy Spring to all ...
Posted by Peggy Lampotang at 1:40 pm No comments: Links to this post

It was such a wonderful treat for the lucky ones who could make it last weekend to Terry Fallis's workshop at Lakeview Inn. Terry showed us how to be more methodical, efficient, and disciplined about our writing. We even managed to do some creative writing, and also learned how to outline, podcast and self-publish. It was a privilege to hear him read a few paragraphs from chapter 5 of his sequel, freshly written in the morning, in the calm, reflective atmosphere of the farm.

Terry's talents did not cease to surprise us. He picked up a guitar that was lying around, and started strumming along and singing. Talk about bonus entertainment ... He even knew old French songs by Harmonium. And he was so good and it was all so magical that Judy joined in with her mandolin, and Diane, Julia and I were singing along and dancing. Terry also sprinkled some humour and a few witticisms as he kindly listened to the stimulating "women-geared" topics of conversation initiated by Suzanne, our renaissance woman. He even offered to help in the kitchen and made delicious scrambled eggs.

Thanks Terry for being such a gentleman. You made the weekend so special for all. 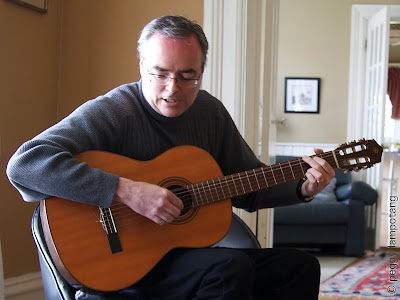 Posted by Peggy Lampotang at 8:34 am No comments: Links to this post