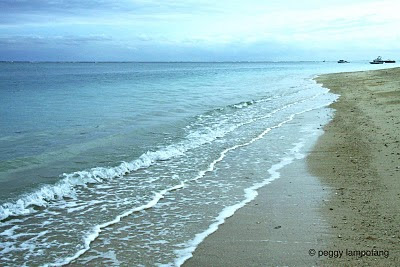 I was in Mauritius for a short trip and walked for a long, long stretch along this beach at Flic en Flac. It was so calming to watch the waves swell back and forth and splash their foamy frills along the shore. Such a wonderful way to relieve the stress that had accumulated over the last months ...

While I was there, inspired by a friend's fascination for Gandhi, I finished reading The Essential Gandhi, an anthology on his writings, his life, work and ideas. Here's a man who dared to dream of freedom for his country, a man who held on to his belief in non-violence, and just marched with unshakable conviction towards his goal. We need more visionaries like him to lead this world, visionaries who are not sidetracked by the lure of material gains, visionaries who believe in the inherent good in people, and have the ability to bring it out.

This quote from Gandhi reflects what I've always felt about the far-reaching power of love.

"We are bound by the ties of love … Scientists tell us that without the presence of the cohesive force amongst the atoms that comprise this globe of ours it would crumble to pieces and we would cease to exist, and even as there is cohesive force in blind matter so much must there be in all things animate and the name for that cohesive force among animate beings is love … where there is love, there is life, hatred leads to destruction …"
Posted by Peggy Lampotang at 6:10 pm 1 comment: Links to this post