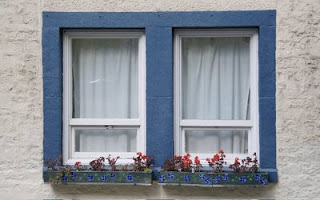 I was in Quebec City during the Francophone summit with my dear friend Pam, the Washington correspondent for Weekend. Over 50 heads of states were there, among them the Prime Minister of Mauritius, but President Sarkozy was really the big buzz. Glad he didn't bring Carla with him. There would have been hordes to deal with. I was already overwhelmed by blocked streets, helicopters hovering above buildings, soldiers in army fatigues positioned around the Congress centre. Add to that a constant stream of black limos with official flags, followed by cars, vans equipped with security and it was enough to make you feel Quebec City had been transformed into a tense, scary place, a danger zone. Once you got past tightly-guarded Congress Centre, The Hilton and Chateau Frontenac, and walked along Rue St. Jean, the city was its usual self with restaurants and shopkeepers eager to please. Vieux Québec was charming as usual. Rue du Petit-Champlain's cute stores, their stonewalls covered with climbing plants, exuded a cozy atmosphere which made you want to stroll along lazily, listen to music, sit in a café and do absolutely nothing ... or well, perhaps flirt with those friendly Québécois.

Passion Francophonie, a show at Palais Montcalm, treated us to talented francophone singers and musicians from Vietnam, Haiti, Madagascar, to name a few. Nightlife was fun. We listened to a Québécois singer strumming his guitar while singing ballads and country songs at Le Pape-Georges, a cavernous space, so tight that people sit huddled against each other. This proximity allowed us to chat with the musician and even ask him to play songs for us. Jazz at the the Clarendon Hotel was the opposite, the lounge expansive with plenty of distance between patrons, the music pleasantly mellow.

Fleuve St. Laurent shimmered as we walked along the boardwalk. I love Quebec city, especially when it's not -35º C. It was neat to rediscover it with Pam and her warm enthusiasm. 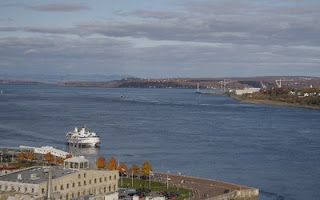 Posted by Peggy Lampotang at 4:41 pm No comments: Links to this post

It was neat to hear that the Nobel prize winner Jean-Marie Gustave Le Clézio has ties to Mauritius, the island where I was born. This article in The New York Times mentions that his family is from there, and that he divides his time between Nice, Mauritius and Albuquerque. Another article from African Press Agency even mentions that he is dedicating his prize to Mauritius. I imagine it'll be a great boost for the island's tourism industry.

I've read only one of Le Clézio's book, Le Procès-Verbal (The Interrogation) a while ago, and I remember feeling the same disconnection in his main character as when I read Camus' l'Étranger (The Outsider). It's not the kind of book that makes you feel great afterwards, but it does makes you go deeper into yourself and question what life is all about.

It's so inspiring to hear that he is a world traveller, that his experiences living in different countries have guided his writing. I now want to read all his books to understand better why he won the Nobel Prize.
Posted by Peggy Lampotang at 1:55 pm No comments: Links to this post

To be creative is certainly Canadian

Word on the Street was packed and Nuit Blanche kept us awake till dawn. Toronto's enthusiasm for art and culture is here to stay whether Stephen Harper believes in it or not. Margaret Atwood's Globe and Mail article, To be creative is, in fact, Canadian, explains the importance of creativity in our society, its positive impact on our economy, and why it should be supported by our government. Yeah, it's right on and reflects what I believe.
Posted by Peggy Lampotang at 11:33 pm No comments: Links to this post