"There was the sea, the smell of the sea drifting from the wind, the sound of the sea, and we would listen, shivering, to its forgotten voice telling us: don't leave, don't leave."

There is something haunting about Le Clézio's description of the sea in this novel, part of which takes place on the island of Mauritius between 1892 and 1911. But the presence of the sea, the way it seeps into the novel, and latches on to the reader's mind feels so overwhelmingly real that I'm there gliding along the waves with young Alexis. It makes me realize how much I miss the sea as I sit here in my studio looking at the CN tower bathed in the pink glow of dawn.

Le Chercheur d'Or (The Prospector) is the story of a man searching for treasure buried by corsairs on the island of Rodrigues. His long journey gains spiritual meaning in the end when he discovers that the real treasure is love and beauty around him.

So true how we often can't see what we have until we take a long, arduous journey that puts things into perspective.
Posted by Peggy Lampotang at 6:45 am No comments: Links to this post 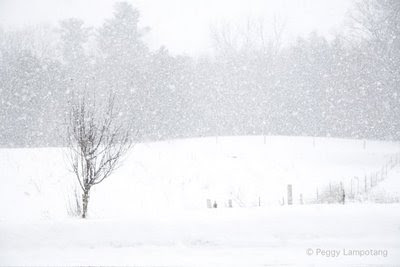 Snowfalls like these can be so beautiful and romantic and yet so sad ...

But ah, March is here. A whiff of spring wafting tentatively. A few days ago the cutting cold would discourage any form of life to venture out. But we Canadians have developed thick skin. Come snow or ice, we're out dancing, going to theatres, concerts, hockey arenas ... I've been warding off the cold by devouring books that spill with warmth and sunshine in spite of their heart-breaking themes. My latest passion: Mauritian and Indian writers.

Le Dernier Frère by Nathacha Appanah is a story that moves with wonderful fluidity and rhythm. Appanah's ease in expressing strong emotions without being too sentimental makes Raj so real that we feel as if we're right beside him throughout the book. Raj is a young boy whose father, a prison guard, comes home drunk every night and beats him. Raj finds solace in his friendship with a boy who lives in the prison camp. David is one of the 1500 Jews who were not allowed to enter Palestine and were detained in Mauritius by the British during the Second World War. David's parents died in the camp and Raj's two brothers died in a storm. Their shared sorrow is palpable. It's a moving story of friendship, loss, and the courage of survival in the lush tropical island where I grew up. Appanah's writing is sensual, poetic, rich in details. She gets the reader involved with her characters to the point of being moved to tears. I needed a lot of Kleenex.

The God of Small Things by Arundhati Roy is a fantastic book my friend Chris gave me. Thanks Chris. The book is a little treasure chest of words strung together in an emphatic style that makes every detail jump out. Roy's lavish use of similes, and metaphors sometimes brushed with humour, is brilliant and shows a quick and creative mind constantly on the move. "The sky was orange, and the coconut trees were sea anemones waving their tentacles, hoping to trap and eat an unsuspecting cloud." is just one example of her evocative descriptions. Reading her feels as if I'm walking in an exotic market place with an abundance of colours, sounds, smells, movement. I'm so taken by her writing style and the profusion of images that the story almost seems secondary. But of course it's all perfectly interwoven. The compelling story of Rahel and her twin brother Estha, as they shift from innocence to tragic journeys in life, also exposes the politics and social disparities of India. It is an amazing read.
Posted by Peggy Lampotang at 9:38 am No comments: Links to this post